Nature – The best artist, but sometimes it interferes with the idea man, and because such an alliance appear surprising places. We offer you a selection of the most unusual parks in the world. 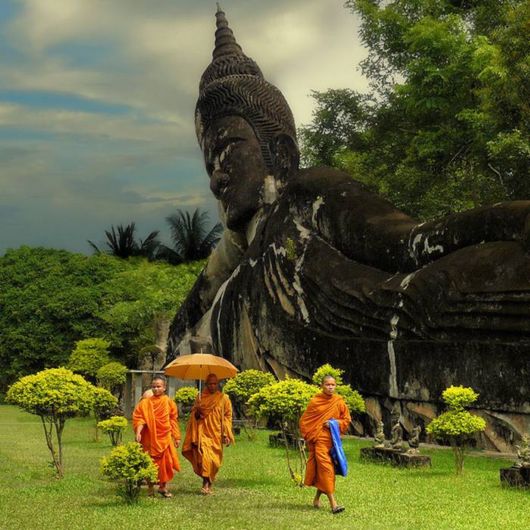 The park was started in 1958 by Luang Pu (Venerable Grandfather) Bunleua Sulilat. Luang Pu Bunleua Sulilat was a priest-shaman who integrated Hinduism and Buddhism. His unique perspective was influenced by a Hindu rishi under whom he studied in Vietnam. After the revolution in 1975, anxious about the repercussions of the rule of Pathet Lao, he fled from Laos to Thailand where he built another sculpture park, Sala Keoku in Nong Khai. Both parks are located right next to the Thai-Lao border (Mekong river), only a few kilometers apart from each other, and the tallest structures of the Buddha Park can actually be seen from the Thai side of Mekong.

The statues are made of reinforced concrete and are ornate, and sometimes bizarre, in design. The statues appear to be centuries old, though they are not. There are sculptures of humans, gods, animals, and demons. There are numerous sculptures of Buddha, characters of Buddhist beliefs like Avalokitesvara, and characters of Hindu lore, including Shiva, Vishnu, and Arjuna. These sculptures were presumably cast by unskilled workers under the supervision of Luang Pu Bunleua Sulilat. One notable sculpture resembles a giant pumpkin. It has three stories representing three levels – Hell, Earth and Heaven. Visitors can enter through an opening which is a mouth of a 3-metre-tall demon head (9.8 ft) and climb staircases from hell to heaven. Each story contains sculptures depicting the level. At the top, there is a vantage point where the entire park is visible. Another sculpture, an enormous 120-metre-long (390 ft) reclining Buddha, is also a park attraction. 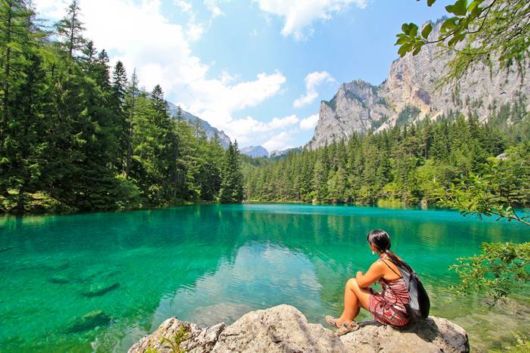 Grüner See (Green Lake) is a lake in Styria, Austria near the town of Tragöß. The lake is surrounded by the Hochschwab mountains and forests. The name "Green Lake" originated because of its emerald-green water. The clean and clear water comes from the snowmelt from the karst mountains and has a temperature of 6?7 °C (43?45 °F). During the winter, the lake is only 1?2 m deep and the surrounding area is used as a county park. However, during the spring, when the temperature rises and the snow melts, the basin of land below the mountains fills with water. The lake reaches its maximum depth of around 12 m from mid-May to June and is claimed to look the most beautiful at this time. In July, the water begins to recede.

The lake supports a variety of fauna such as snails, water fleas (Daphnia pulex), small crabs, fly larvae, and different species of trout (Salmo). The flora is not abundant because of the rocky bottom of the lake. Furthermore, the lake?s depth is variable since its inflow comes from snowmelt.

The lake is popular among divers who can observe the green meadows in the edge zone of the lake particularly in June when the water is at its highest. A bridge and a bench can also be found underwater. 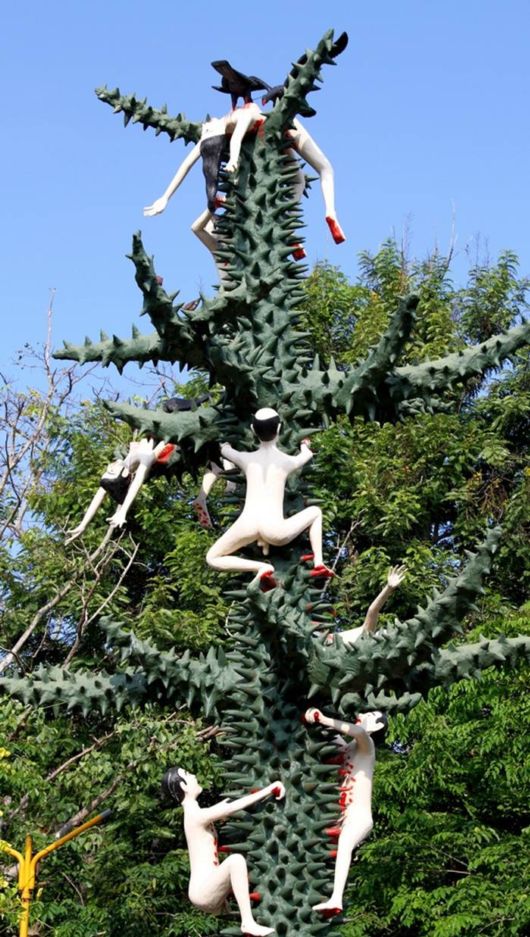 90 minutes outside of Bangkok sits the Wang Saen Suk Hell Park, one of several "hell gardens" that can be found throughout Thailand. At this tourist destination, you can pack a picnic and ramble around the charming sculpture garden, which depicts sinners being eviscerated wholesale in the Buddhist underworld.

After all, nothing says "sunny weekend stroll" quite like statues of demons disemboweling the damned, arsonists transforming into snakes, and dogs eating a lost soul’s giant testicles. Also, if you’ve ever used birth control, there’s apparently a giant bloody vise waiting in the afterlife. (I’m not sure if dental dams qualify one for an eternity of squeezing.) Notes Fortean Times of this charming point of interest:

Around the giant sinners stand a further 21 life-size sinners, whose heads have been turned into various animals according to their misdeeds. Thieves are transformed into monkeys; the dishonest into toads; the corrupt into pigs […] Although often gruesome, Thailand’s hell gardens are popular weekend destinations for family days out. As well as an entertaining way of teaching strict morality, they also encourage donations as a form of merit-making to support the monks and the monasteries.

One of io9’s friends in Thailand further elaborated on the park’s family-friendly angle ? "It’s fun seeing little Thai kids running around statues of people being eaten alive, having their guts torn out, etc. My five-year-old cousin loves the amusement park, but is terrified of Ronald McDonald." So yes, if Faces of Death ever went in cahoots with Six Flags, the result might just look like this. 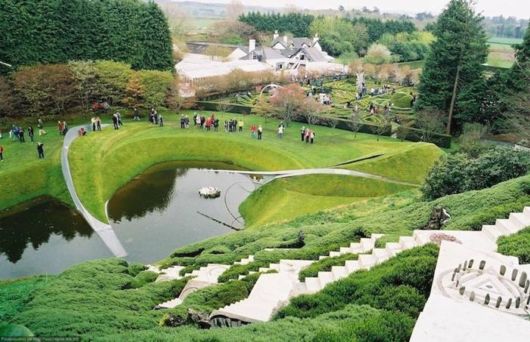 Space View Park is located less than 15 miles directly across from the launch pads. The Park is the first and only walk in the nation that honors America’s astronauts as well as the men and women behind the scenes who helped America lead the world in space exploration. Located 5 miles North from HWY 50 off of US1 on Broad Street on HWY 406 (Garden Street) off of Indian River Avenue.
Creation Museum ? USA 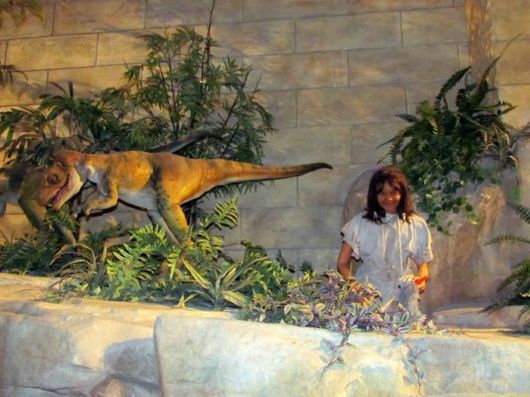 The Creation Museum is a tourist attraction near Petersburg, Kentucky which presents a mythical account of the origins of the universe, life, and humankind, portraying a ‘creationist’ narrative based upon a literalist interpretation of the Book of Genesis, rather than scientific knowledge. The Creation Museum opened its doors to the public on May 28, 2007.

The Creation Museum has been criticized as promoting "fallacy over fact" and attempting to advance the tenets of a particular religious view while rejecting, overlooking and misconstruing authentic science. The museum has received criticism from the scientific community, educators, Christian groups acquainted with the scientific method, and in the press.

Its exhibits reject universal common descent and biological evolution, and assert that the Earth and all of its life forms were created 6,000 years ago over a six-day period. In contrast to the scientific consensus, exhibits promote creationist claims including the proposition that humans and dinosaurs once coexisted, and that dinosaurs were on Noah’s Ark. Scientific evidence supports the conclusions that the earth is approximately 4.5 billion years old, and that the dinosaurs became extinct 65.5 million years before human beings arose. 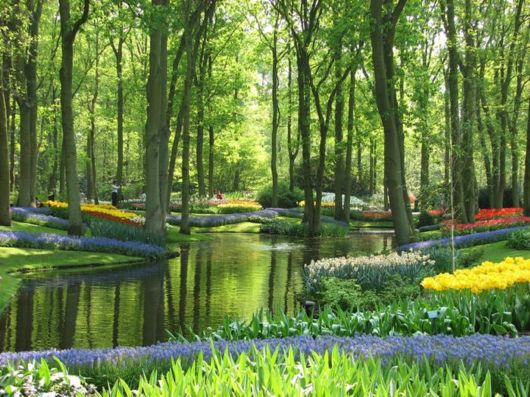 Keukenhof, also known as the Garden of Europe, is the world’s largest flower garden[citation needed]. It is situated near Lisse, Netherlands. According to the official website for the Keukenhof Park, approximately 7,000,000 (seven million) flower bulbs are planted annually in the park, which covers an area of 32 hectares.
Keukenhof is located in South Holland in the small town of Lisse, south of Haarlem and southwest of Amsterdam. It is accessible by bus from the train stations of Haarlem, Leiden and Schiphol. It is located in an area called the "Dune and Bulb Region" (Duin- en Bollenstreek).Keukenhof is open annually from mid-March to mid-May. The best time to view the tulips is around mid-April, depending on the weather. 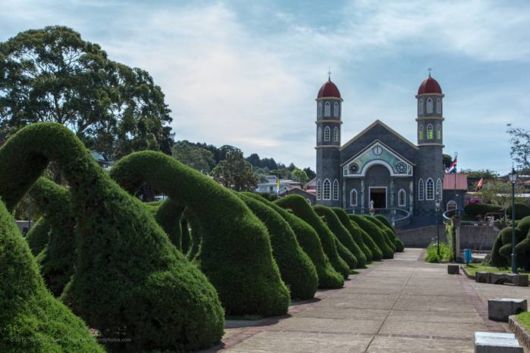 The park sits in front of the church at the town center. It is noted for its topiary garden produced and maintained by Evangelisto Blanco since the 1960s. Shrubs in the park have been trimmed into the shapes of various animals, including some that are quite abstract and bizarre.

Iglesia de San Rafael: Zarcero’s pink and blue church was constructed in 1895. The interior features very nice paintings of the stations of the cross. Materials for the construction of the church are not what they seem. Columns are painted to look like marble, and the exterior is metal siding, not brick as it appears. 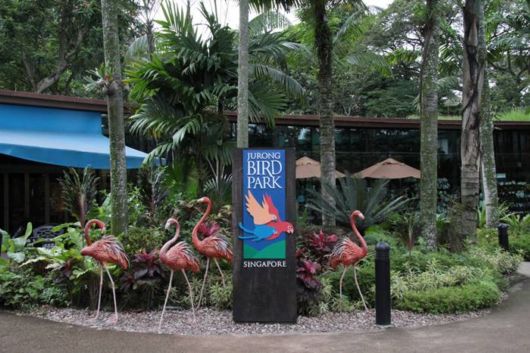 Jurong Bird Park, is a tourist attraction in Singapore managed by Wildlife Reserves Singapore. It is a landscaped park, built on the western slope of Jurong Hill. It is located within the Boon Lay Planning Area of the Jurong district and has an area of 202,000 square metres (50 acres). 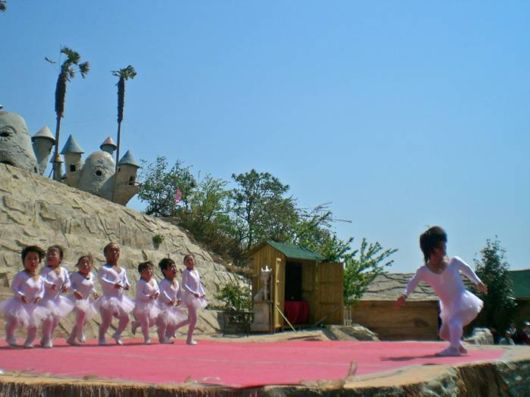 The Kingdom of the Little People is a theme park located near Kunming, Yunnan that features comic performances by people with dwarfism. Supporters of the park claim that it provides employment to people who would otherwise be unable to find work, but it has been criticized for treating dwarfism as a humorous condition. 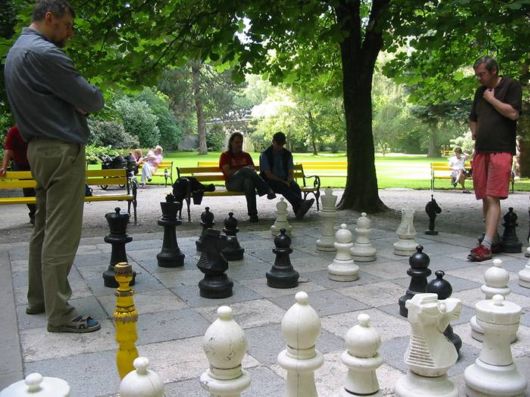 The garden was erected to celebrate the sister city relationship between Sydney and Nagoya in Japan. Some of the interesting features in the garden include a set of magnificent stone lanterns presented to City of Sydney by Nagoya. It also incorporates various plants in the garden which have cultural significance to Japanese people. For example, pine tree symbolise long life, a plum tree represents gracefulness and bamboo is a sign of vitality.