Many of us enjoy testing our nerves by seeing scary movies or going to theme parks, but in these events you can bring your worst fears to life. Werewolves, Zombies and other frightening characters can become as real as they are in your nightmares. If you’re thinking of trying something a bit more terrifying with your friends, we recommend you have a look at these activities that are guaranteed to get your heart pounding and your palms sweating. 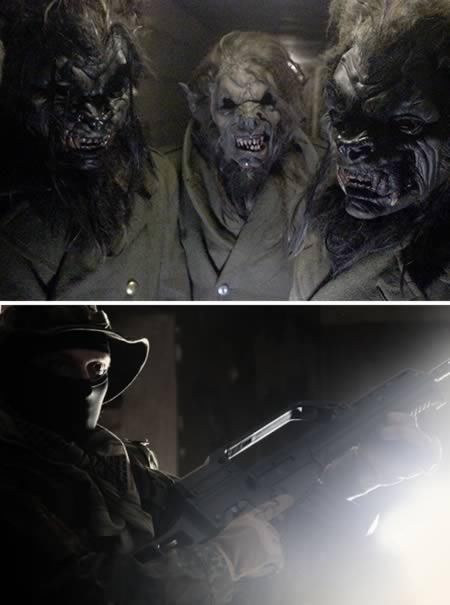 Many of us dream of being chased by mythical creatures in dark forests, or of being hunted by a snarling being from the shadows. This experience, created with events company Chillisauce , brings those nightmares to life and allows you and your friends to build a fort, complete with trip wires and explosives, as you go out in search of a werewolf.

It’s late, and it’s dark, and based in an already creepy forest in the Midlands near Birmingham your heart is guaranteed to start racing. Your base is your safe zone, but after receiving weapons training and learning survival techniques you will want to set off into the woods in search of the beast. The werewolf isn’t real but the feel of the day really makes you believe you are in a movie. 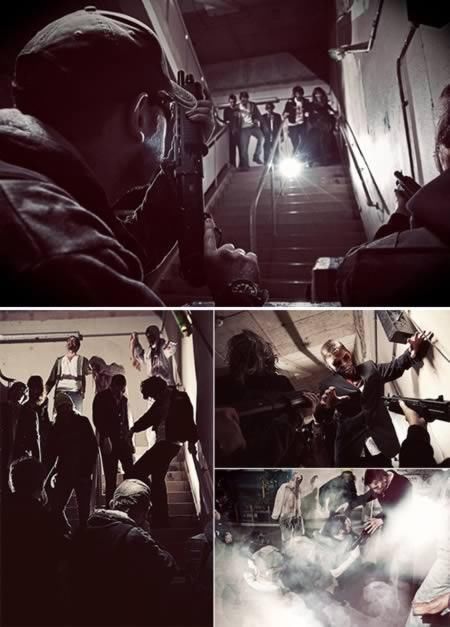 The Zombie Shopping Mall based in Reading, UK is seriously worth paying a visit. Based in an abandoned shopping centre with no electricity you and your mates have to navigate the shops and stair wells of a mammoth playing field. We all enjoy the typical slow moving undead, but these ones will chase you and it really is survival of the fittest as you climb broken-down escalators and tear through an abandoned chain of Clair’s Accessories.

Armed with just a gun and a flashlight you can either creep up on your prey, or be prepared to get chased. No electricity and a start time of 6pm means you will need your torch as the darkness becomes a real survival issue, but if the zombies see the light they will be after you. This event is guaranteed to get your heart pounding. The death and infection of the zombies may be an act, but the panic, fear and adrenaline are all very real. 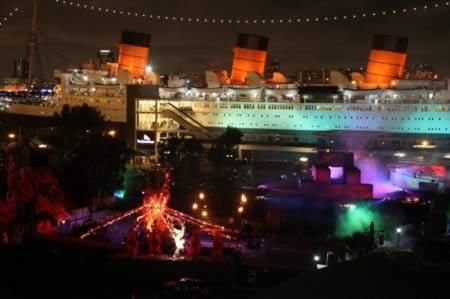 There are some people who believe the historic Queen Mary to be haunted year-round, and who advise staying far away from this grand but spooky old ship on Halloween. But when the Queen Mary’s resting place turns into ?the harbor of the damned,? seemingly half of Southern California line up alongside the curious tourists to buy a ticket. Now you can hop aboard the 12-deck ship and experience 7 terrifying mazes, 1 sassy "fright mistress" in her private lair, a 45,000-square-foot "Dome of Doom" dance hall, and all the requisite skeletons, blood and gore.
4. Ghost Bus Tour (England) 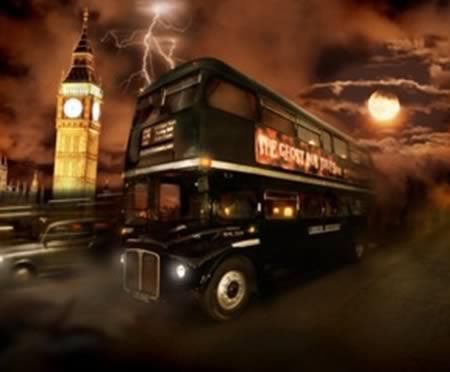 The last bus through Tottenham may be a scarier ride than the Ghost Bus Tour, but that’s not to say it’s not a lot of fun. Take a ride on this vintage double decker as you take a ride through some of London’s scariest tales, from murder to hauntings and execution.

But be warned. As you uncover our capitol’s darkest secrets you shouldn’t feel too comfortable in your seat. Live actors and some clever technical tricks will ensure that this is a bus journey you will never forget, and will seldom want to travel again. The bus, kitted out with typical haunting music and archaic furnishings, takes you past the usual suspects of the Tower of London and Crossbones, but some surprising tales are thrown in as well.

Perhaps the most endearing part of this tour is the banter. Traffic Jams and the odd drunken group sitting in the back row could lead many a hired actor to collapse, but The Conductor on this bus enjoys chat with the passengers as much he does telling you that Prêt A Manger is haunted. 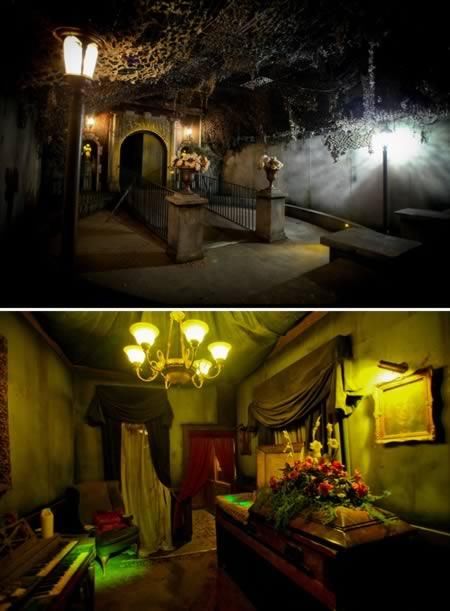 13th Floor Phoenix isn’t just a 60,000-square-foot onslaught of terror and insanity. It’s a mega haunted house offering one of the most detailed and terrifying haunted houses in North America. Featuring 2 attractions that thematically span classical horror to modern day zombie apocalyptic carnage, this haunted house is a must see. You’ll first experience the essence of Halloween in a highly detailed series of haunted mansions, gothic graveyards, and tormented asylums that play out in fantastic wonder in what many have referred to as ?one of the most impressive haunted houses in the country.? Inside the second attraction, Zombieland, patrons experience a one of a kind trip through the apocalypse as they navigate their way through a city infected with undead turmoil. The 13th Floor Phoenix features over 100 performers, amazing costumes, and horrifying thematic experiences that rival television and film in the scope and scale of its production.
6. London Dungeons (England) 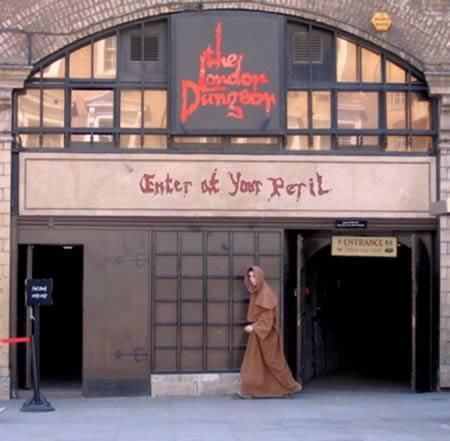 It may be a classic, and one you have already heard of if you have already been in England, but it doesn’t make it any less exciting or terrifying. The London Dungeons has earned its title as one of the scariest attractions in Britain. Some won’t pass through the front door; many won’t last the full 90 minutes.

Meet the infamous Bloody Mary, get a shave from Sweeney Todd, and experience the shadow of the Black Plague as your tour passes through torture chambers and past actors that are sure to get your pupils dilating. In 2012 the Dungeons has expanded to include the UK’s first ever 5D laser ride, so we would recommend you go with your friends, and not alone.

Filled with high tech special effects, digital soundtrack and lighting, the Bates Motel in Philadelphia, PA takes Halloween to a new level of horror?up close and personal! With incredible detail and stellar acting, it is no wonder why the Bates Motel is considered one of the best Haunted Houses in America. The realism in this attraction is astonishing, and is guaranteed to wow the experienced haunted house enthusiast. From the moment you enter you will feel that you have been transported to another time and world. As you creep through this show, you see levitating spirits, floor boards that come alive, pictures that follow you, and incredible, custom animatronic props that you will not see anywhere else. The actors interact with you on a personal level and the screams echo throughout the building!
8. Headless Horseman Hayride (New York) 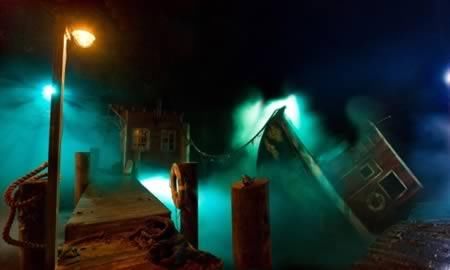 Tim Burton’s chiller Sleepy Hollow has nothing on this Hudson Valley haunt-topia in Ulster Park, New York. In addition to the hayride, there are six haunted houses and a corn maze, plus a creepy illusionist show in an abandoned warehouse. There are countless scares, spread over 45 acres.
9. AtmosFEAR (England) 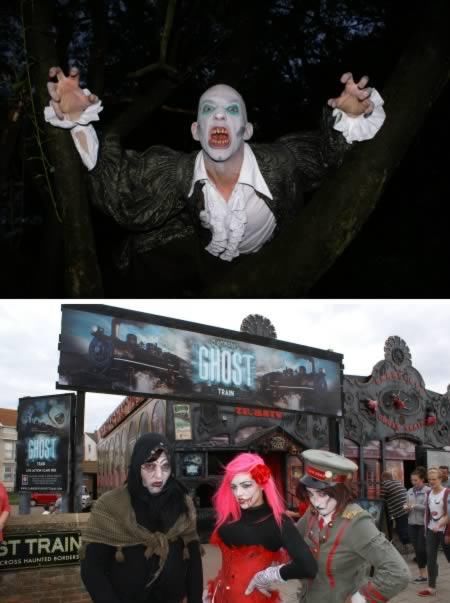 The UK based AtmosFEAR team, who you may have seen on Dragons Den some years ago, specialize in turning office buildings and country estates into scare attractions for special events. Visitors are allowed to delve into a story as they travel through various spooky haunts, following a narrative that will bring this experience to life. With terrifying props, actors and groundbreaking special effects, their team will even turn your own house into a scare park fit for a zombie king.

So if you’re thinking about something spooky for a day out or an event, why not turn your office, shopping center or house into something that looks like it could be the set of the next mid-budget Hollywood horror movie.