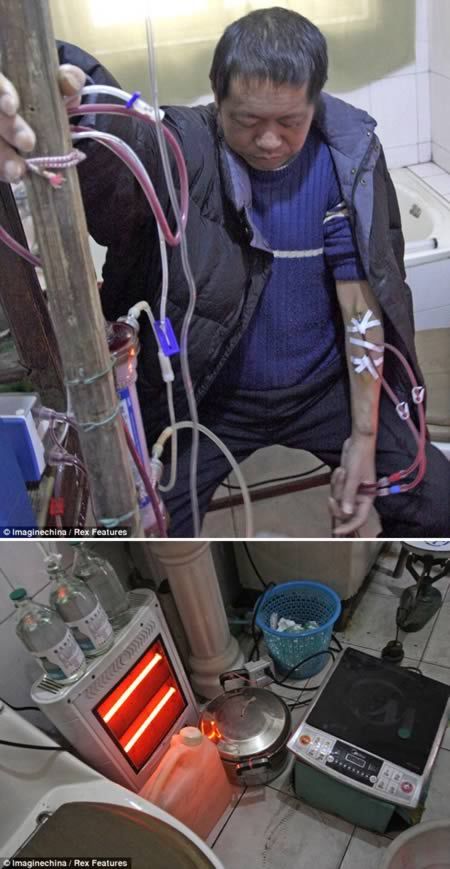 Three times a week, Hu Songwen sits on a small toilet in his home in a rural east China town and fires up his homemade dialysis machine. Hu, who suffers from kidney disease, made it from kitchen utensils and old medical instruments after he could no longer afford hospital fees.

He was a college student when he was diagnosed with kidney disease in 1993, which means thatwaste products cannot be removed from his blood. He underwent dialysis treatment in the hospital but ran out of savings after six years. His solution was to create his own machine in order to slash his costs.

The machine works like an external kidney. It is made up of two compartments that are connected by a membrane (a film-like structure that allows only some particles to pass through it). Blood is pumped through one half of the machine, while the dialysis fluid is pumped through the other half. Hu makes the dialysis fluid by mixing potassium chloride, sodium chloride and sodium hydrogen carbonate (bicarbonate) into purified water. For the treatment, he inserts two tubes into his arm, which are connected to his dialysis machine. The blood is pumped out of his arm through one of the tubes, filtered, and then returned to his body via the other tube.

He has kept himself alive for 13 years using his machine. 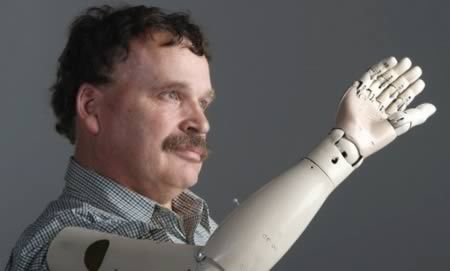 Just to be clear, we’re not suggesting that you ignore your doctor’s advice, but we’ve got to admire Mark Lesek, who refused to accept that he was unsuitable to receive a prosthetic arm. Lesek lost his arm in a car accident five years ago but was told that the amputation was too high for him to receive a usable prosthetic.

Then he heard about osseointegration, a medical field involving implanting metal into bone. The doctors in Melbourne, Australia refused to perform the procedure, so Lesek flew to Sweden and went to the Branemark Osseointegration Centre where he was fitted with an $80,000 bolt that acts as a sort of artificial shoulder.

Unable to find an affordable and suitable prosthetic arm, Lesek took matters into his own hands and crafted an arm with the help of a friend at his welding and engineering business. He has also enlisted the help of a team at the University of Tasmania to develop a more agile computer-controlled arm.

This just goes to show that your parents were right — you can do anything you want. Although, it helps if you have your own engineering lab at your disposal.

Fans can do all kinds of things to show their love for their favorite superheroes. In the case of Archie Whitehead, a 17-year-old high school student from Welwyn Garden City, a town 20 miles outside of London, that means building an amazing, highly realistic costume of Iron Man. The homemade suit is so good that you can barely distinguish it from the one used in the movie.

In January 2013, Whitehead wanted to make an Iron Man suit. He saw that somebody in the United States had made a DIY Iron Man costume in fiberglass, but that wasn’t going to be possible because it would be too expensive for a 17 year old. However, he saw that somebody else had made a Halo costume with foam, which is a much cheaper substance.

Once he decided on the material, he downloaded some 3D files from online prop and costumes forums and used "loads of reference images" to modify the downloaded templates. He then printed the templates and used them to trace the pattern on the foam, which he then cut with a knife. Once he polished all the corners, he glued everything together and used small bolts for the joints. He then sealed the foam with acrylic gel, which allowed him to keep the costume flexible while at the same time making it paintable. Finally, he colored everything with spray paint. Every part of the costume is made of foam, except for the helmet, which is made of resin fiberglass, which took him the most time to build.

The whole project took approximately four months. He put in a few hours of work every day during his spare time. The entire costume, counting all the materials, cost him about $500.

The suits featured in Iron Man 3 total $7 billion alone ? previously they totaled $1.4 billion. Among the new bells and whistles are a hyper velocity shotgun and updated armor. 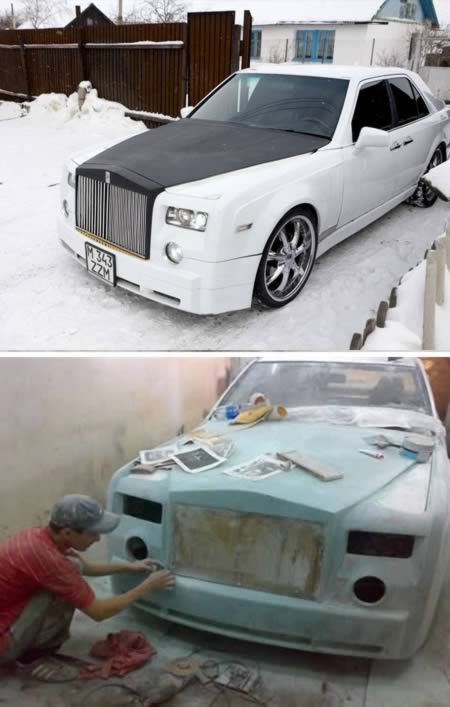 How many 24-year-olds do you know who own their very own Rolls Royce Phantom? Well, you can add Ruslan Moukanov to this list.

Young Moukanov, from Kazakhstan, fell in love with the luxurious Rolls Royce Phantom ever since he saw some pictures of it a few years ago while sitting in the local library. Tormented by the desire to own a Phantom, Ruslan realized that he couldn’t just buy a 500,000 euro car, so he found a way around that. Using his master-tuner skills, the young Kazakh managed to transform his old Mercedes into a shiny Rolls Royce Phantom. He built the car-kit himself and managed to get his hands on the needed parts. If you don’t count the time and effort involved, this Rolls Royce Phantom cost just 3,000 euros to make, and it looks amazing! 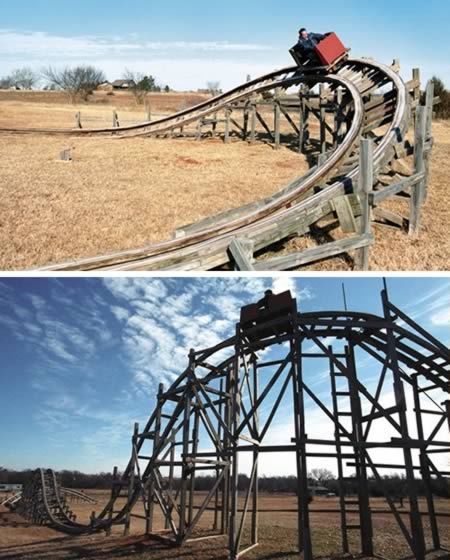 With theme park admission prices increasing every year, enjoying roller coasters is a privilege that many just can’t seem to budget. Fortunately, a very skilled amusement park fan decided to build his very own coaster.

Located on a 10-acre plot southwest of Oklahoma City, Jeremy Reid built an incredible roller coaster in the backyard of his parents’ home. It cost Reid $10,000 to build and features a 16-foot drop that propels riders — friends and family — to speeds in excess of 15 mph. 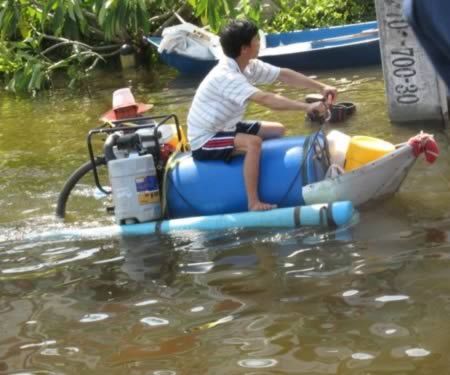 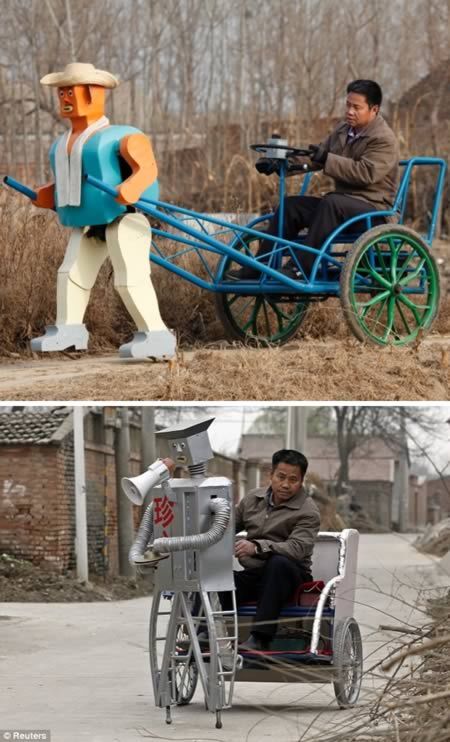 The sight of a farmer being pulled along in a cart by a walking robot would stop most people in their tracks. However, Mr. Wu Yulu’s neighbors on the outskirts of Beijing are used to the spectacle. The 48-year-old has achieved worldwide fame after inventing and building 47 robots in his backyard out of scrap metal. They can perform functions as varied as jumping, painting, drinking, massaging and, of course, pulling carts.

He started his unusual hobby in 1986 and has continued ever since, despite taking on huge debts, being sprayed with battery acid, and risking his marriage. But now Mr. Yulu’s perseverance has paid off. He has been invited to display more than 30 of his robots during the Shanghai World Expo 2010, where he will promote the practical uses of his robots.

The inventor has already received a string of prizes and contracts with universities. 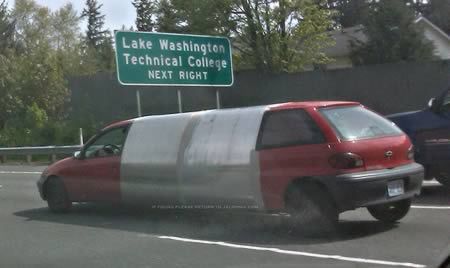 It takes a special sort of genius to even envision a limo consisting of 2 or more Geo Metros, let alone to build one. Is that duct tape? That’s even better.

Caught by Jalopnik reader Louis near Seattle, this car could spark an entire master’s thesis in engineering and philosophy. How do the rear brakes connect? Does it have a Cobb stick shift? Is the silver exterior there to keep a giant tank of coffee warm? Why, in the name of all that is good and holy, did someone need an automotive answer to the dachshund? 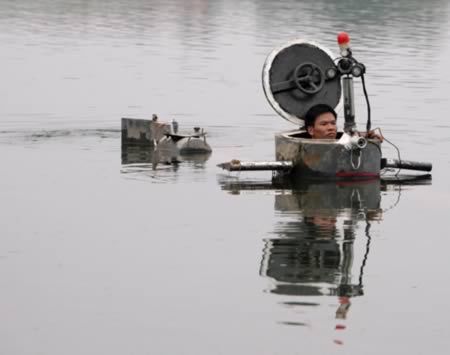 A brilliant Chinese inventor by the name of Tao Xiangli has come up with an amazing idea of building a submarine using minimum resources and costing a stunning low amount of cash. It took the 34 year old a couple of years’ hard work and a little over four grand to get the whole underwater mission complete. His submarine is made up of propellers, electric motors, a periscope, and a depth control tank. The best part is that it cost just about $4,385 to build. 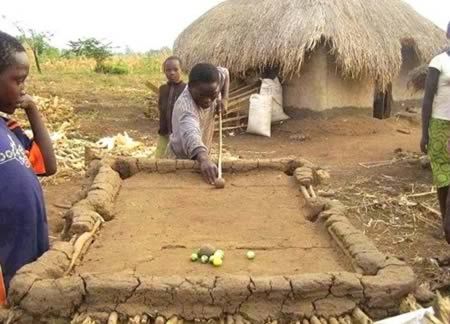 When life gives you sticks and dirt, you make … a homemade pool table! It goes to show that you can’t keep a determined pool player down. The photo was taken by Hal Carim near Garoua, Cameroon.