This is a collection of extraordinary rare and weird deformed animals. 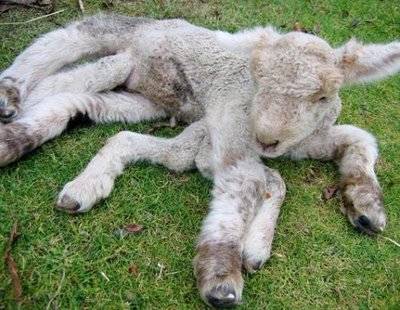 This seven-legged lamb was photographed when it was found on July 31, 2007, at the farm at Methven near to Christ Church which is situated in the South Island of New Zealand. The veterinarian, Steve Williams believed that this deformity was caused by a misprint in embryo formation. Due to this scientific reason, the lamb was being born polydactyl (or with many legs). He further remarked that this is a common condition that may have occurred once in every several million sheep. 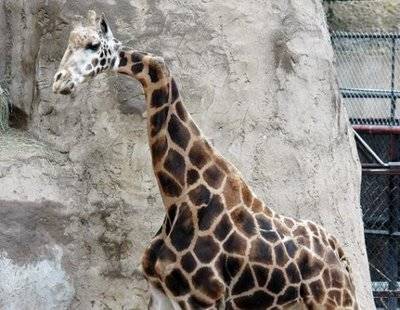 This was Gemina, a giraffe which was found to have a dominant crooked neck joining to its body at the Santa Barbara Zoo. Unfortunately, it died on January 9, 2008. 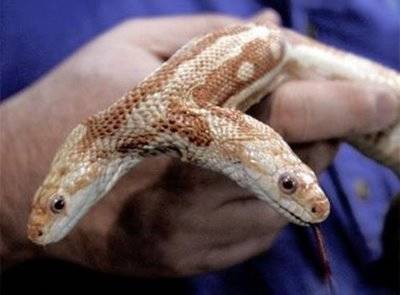 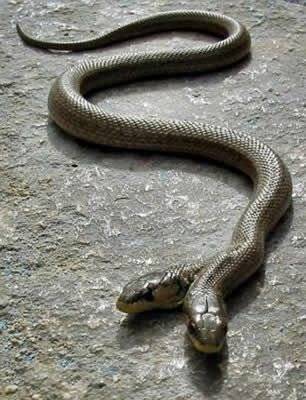 As seen in the photo, this albino snake was born with two heads. The strange feature for such snake is that its two separate mouths were connected to the same stomach. Usually, the snake, which was born with this deformed characteristic, would not live longer. As a result, its life may be as short as two months. Nevertheless, the snake that you see in the picture had unexpectedly survived for a long life span of 8 years. 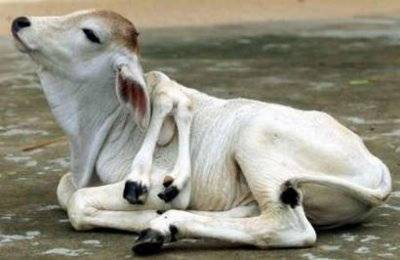 This unusual six-legged Cambodian cow was found resting at the farm near to the Cambodia city, Phnom Penh on October 7, 2003. The monks from the local pagoda who scared of getting bad fortune that would bring by the cow, later named it as "Cham Leck." (Literally means "strange"). 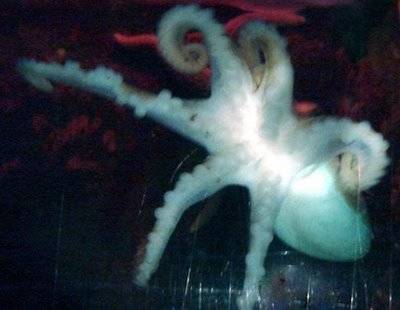 This six-legged octopus or "hexapus" was found by the British marine experts. They claimed that this was the first unusual sea creature discovered among the octopus families. It was observed to have two limbs lesser than its normal species. His keepers at the Blackpool Sea Life Centre which is situated in the northwest of England believed that its deformity was due to the birth defect instead of the casual accident. 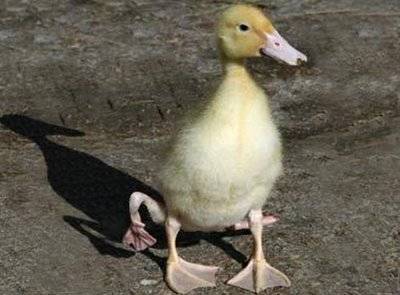 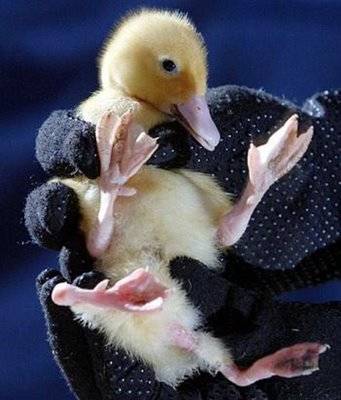 One deformed duckling called "Stumpy" was found at Warrawee Duck Farm in Copythorne, Hamphire (a country on the south coast of England), England. This duckling was born in 2007 with four legs which is unusual to a typical duck that has two legs. While examining this duckling, the scientist found that it has two unusual legs grown out behind its normal pair of legs. According to its owner, the duck has no problem with its daily activities despite these deformed legs which was caused by a rare mutation. These two legs seemed to support its movement. 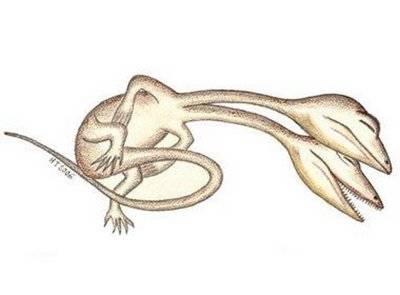 Scientists have long found the double-headed fossil. From the laboratory sample, this aquatic reptile was identified died at its very young age before forming into a fossil. This extinct adult reptile was diagnosed to grow as long as one meter. Its relatively long neck marked its unusual feature among its species. 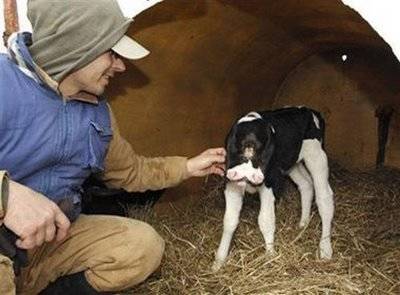 Before New Year’s Eve, one unusual and unexplainable phenomenon occurred in a dairy farm in Virginia, an American state on the Atlantic Coast of the southern United States. A mother cow gave birth to a calf with two faces on December 27, 2006. This calf was believed to be a product of artificial insemination. There was not much of a difference from this calf and other ordinary ones when viewing it from its neck until to its tail. Nevertheless, the rare characteristic for such "double-sided" calf was that it has a relatively unusual large head. It breathed out of two noses, and has two tongues, which moved independently. 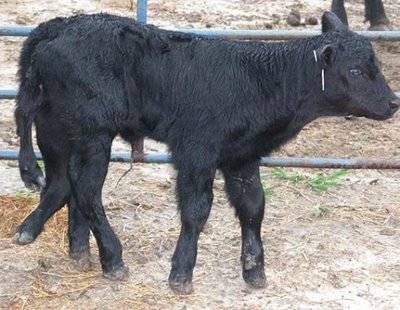 This six-legged calf was born on April 29, 2007 at the farm of Brian Slocum of Litchfield. The calf was diagnosed to have both male and female reproductive organs. 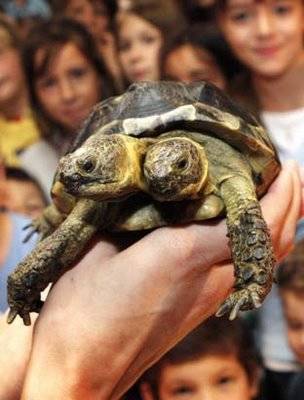 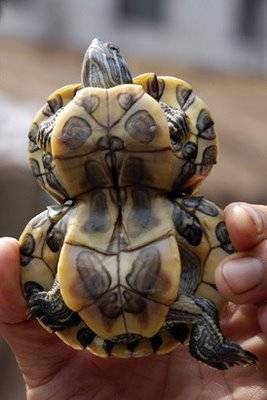 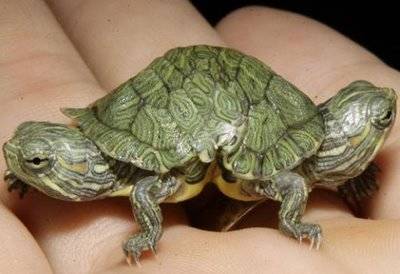 This tortoise was seen on June 24, 2007, in Huaibei which is located in the eastern part of Anhui Province of China. The local media reported that its gourd shaped resembling a large fruit with a hard skin and soft juicy flesh inside was the result of a gene mutation. That means the gene mutation has contributed to its aberration, a condition of a temporary change from what is normal or acceptable among its species. 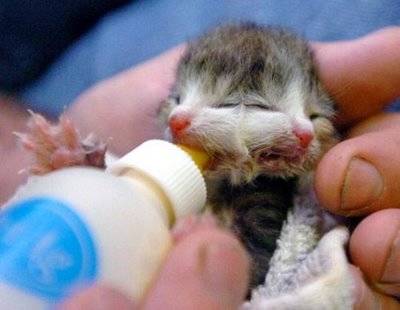 This two-faced kitten was born in Inverness, Fla. It has one esophagus, two noses and four eyes. This photo was pictured while its owner, Cobra Macini was feeing his beloved kitten. 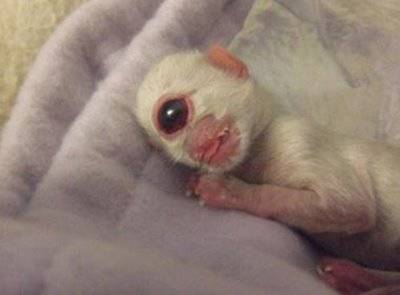 One unusual event happened in Oregon City in the United States. A kitten was born with only one large eye grown on the position of its nose on December 28, 2005. This type of deformity is known as Holoprosencephaly. Besides one eye, the kitten was also found to have no nose at all. This deformed kitten finally died two days after it was born. 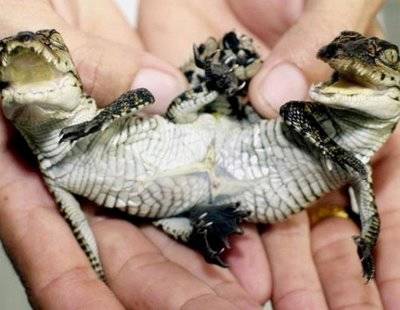 These baby crocodiles were born in June 2001, at the Samut Prakarn Crocodile Farm which is located on the outskirts of Bangkok, Thailand. Unfortunately, they were born with their bodies joined together at their bottom part. They were reptiles identified for having two tails and eight legs. 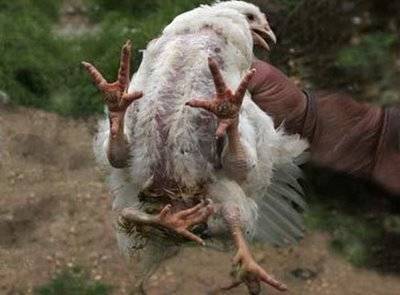 A chicken with four legs was discovered on September 21, 2006, in one of the chicken farms in the United States. This chicken was different from other normal chickens as it has four very long legs attached beneath its body. 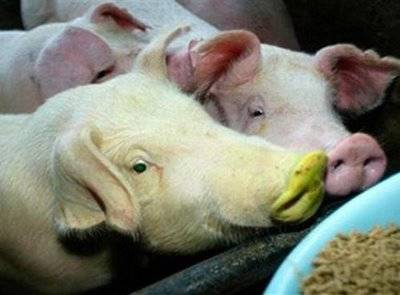 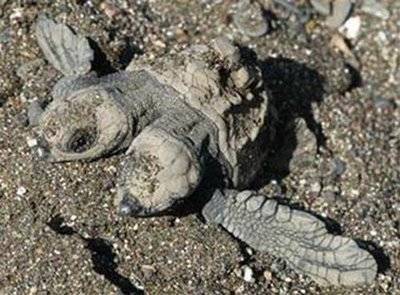 The local people in Costa Rica happened to come across the rarely seen double-headed turtle lying on the shore. This turtle did not have a typical appearance of a turtle, as it had two brains grown out on its front. The turtle in the photo was hatched on the beach on November 20, 2005 in this deformed manner when it was found. 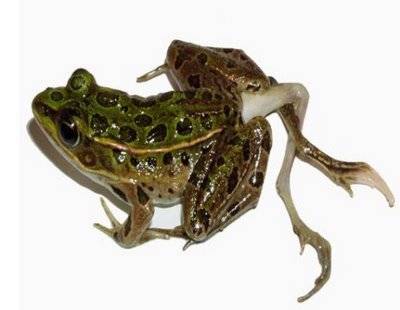 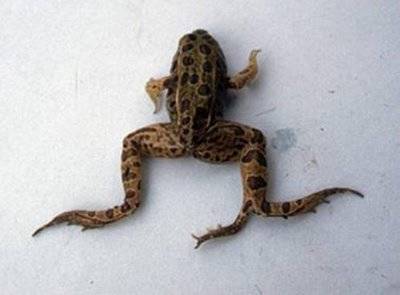 In 1995, many seriously deformed leopard frogs were discovered around the lakes and rivers in the wetlands of the United States. According to reliable sources, several species with these deformities have been found across Minnesota, and into neighboring South Dakota, Quebec and Wisconsin over years. Among these deformed frogs, some were found with three legs, some were found to be handicapped of legs, and some even have four to five legs. When this news spread, it quickly drew the attention of environmental experts. New research identifies that such deformities have been caused partly due to runoff from farming and ranching. This conclusion was supported by the study of a University of Colorado, as they agreed that the growing number of deformed frogs were primarily caused by the nutrient-rich runoff from farming and ranching as indicated by the new research.