These bridges are some of the most death defying, extreme bridges of the world! Includes bridges from Greece, Ireland, Malaysia and even Pakistan!

Mount Tai in the Shandon Province of China has had cultural and religious significance for thousands of years. It is one of the five sacred mountains of China and is associated with the dawn, birth and renaissance. As you progress up the mountain you will come across this ? The Immortal Bridge. This Bridge is composed of three huge rocks and several smaller ones. Below it is a valley and to the south is a seemingly bottomless abyss. No one knows quite when these enormous rocks fell into their current place but it is quite likely they have been like this since the last ice age.

The Old Bridge of Konitsa (Greece) 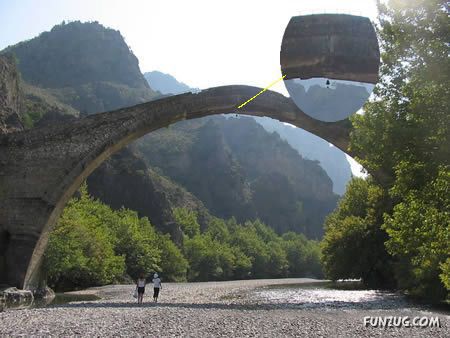 This centuries-old bridge in Greece spans the river Aoos, which is full in winter. If you look carefully to the right under the top of the bridge, you can see a small bell. Villagers say that when there is enough wind to make the bell sound, it is too dangerous to cross the bridge.

Carrick-a-Rede Rope Bridge is a rope suspension bridge near Ballintoy, County Antrim, Northern Ireland. The bridge links the mainland to the tiny Carrick Island. The site is owned and maintained by the National Trust, spans twenty metres and is thirty metres above the rocks below. Today the bridge is mainly a tourist attraction, with 247,000 visitors in 2009. When it’s windy, this is truly an exhilarating experience ? terrifying (if you’re afraid of heights) but exhilarating. 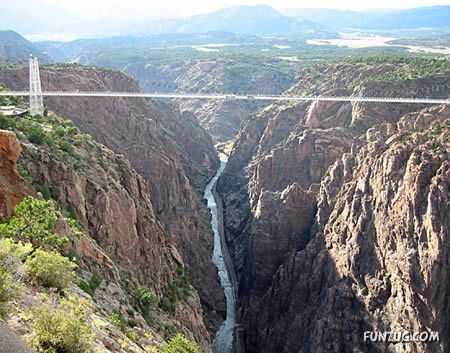 Inca rope bridges were simple suspension bridges over canyons and gorges (pongos) to provide access for the Inca Empire. Bridges of this type were suitable for use since the Inca people did not use wheeled transport – traffic was limited to pedestrians and livestock. These bridges were an integral part on the Inca road system and are an example of Inca innovation in engineering. They were frequently used by Chasqui runners delivering messages throughout the Inca Empire. 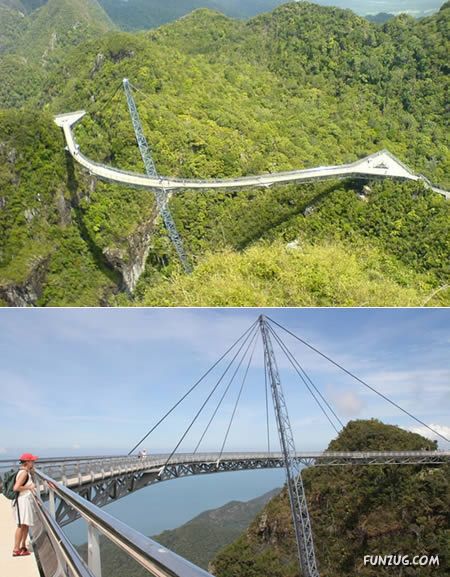 This sky bridge spans around the gorge on Pulau Langkawi, which is the largest island in the Langkawi archipelago, Malaysia. It’s suspended at 687 m above sea level, offering magnificent views of the Andaman Sea and Thailand’s Tarutao Island. The view from the bridge is really breathtaking ? its curves provide different perspectives of the landscapes. The Sky Bridge is one of the most spectacular bridges in the world that delivers quite a pump of adrenaline. This unique cable-stayed bridge is suspended by only one support column. This 95-yard column is held up by 8 load-balancing cables. The curved pedestrian bridge spans 125 m across a spectacular chasm. The bridge is 136 yards long and 2 yards wide. The 1.8 m-wide Sky Bridge had two 3.6 m-wide triangular platforms that provided a spectacular viewing area for visitors. And remember when in the front of the bridge, you are standing 687 m above sea level. 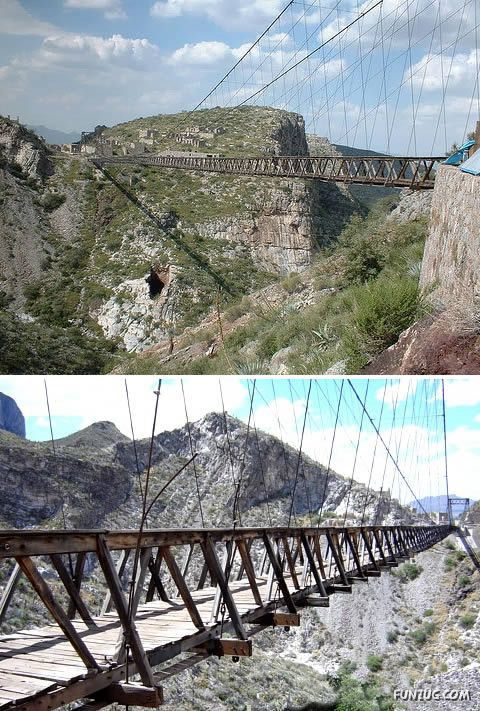 Ojuela was a small mining settlement located northwest of the city of Durango, Durango, in northern Mexico. The settlement is now well known as a ghost town as a result of the mineral ore being exhausted. The only surviving and functional structure is a suspension bridge. The bridge is known as "Puente de Ojuela" (Ojuela Bridge) by the locals. The original bridge was designed by the famous Roebling brothers, who also designed the Brooklyn Bridge. At the time of construction, the Puente de Ojuela was the third longest suspension bridge in the world. It was rebuilt recently by the Peñoles Company, the original was scrapped and only the main arches are now displayed at the Torreón Exposition Center. 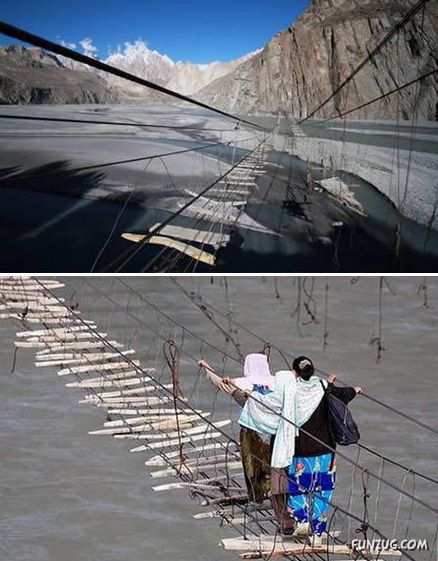 Known as the most dangerous bridge in the world, the Hussaini Hanging Bridge is only one of many precarious rope bridges in Northern Pakistan. For most of the citizens, the only way to travel was by walking across mountain passes to Rawalpindi. In 1978, the Karakoram Highway was completed and the region was connected, but inter-region travel remains as difficult as it was 100 years ago. Regular aspects of travel through this region include the rickety cable and plank bridges which cross Northern Pakistan’s mountain streams and rivers. Among these is the Hussaini Hanging Bridge, crossing Borit Lake in the Upper Hunza. This rope bridge is both long and poorly maintained. Many planks are missing, and strong winds shake the bridge as you cross it. It does little to ease nerves that a previous, older, broken bridge hangs in tatters next to the "new" one. 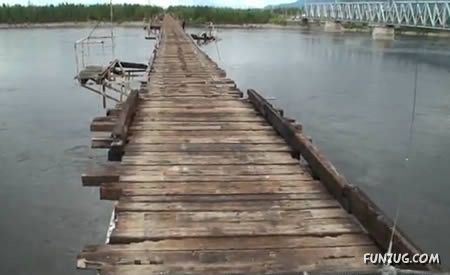 This broad river is the Vitim River in Siberia, Russia. The bridge that’s provided to get you across is made of wood and not in a very good condition. It’s only wide enough for one car but it’s 570 meter (1870 feet) so it takes good 3 minutes to drive across it if you’re a skilled driver. If you’re not so skilled, you could be looking at a 15 meters drop into the Vitim River, which ain’t no fun. And that’s really nothing. Vitim River Bridge is in Russian Siberia. For those who don’t know this region, it gets brutally cold there most of the year with temperatures way below Northern Ontario and everything covered in snow and ice. This bridge turns into an icicle with no traction yet locals drive up and down this bridge as it’s often their only way across Vitim River. 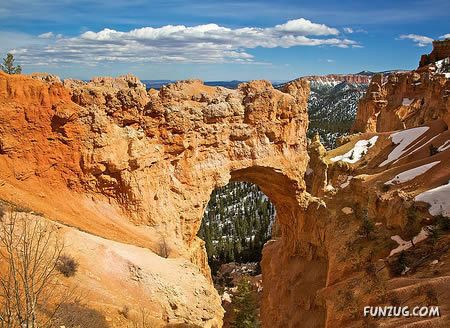