At just six, Shruti Pandey is the youngest yoga trainer in the world.
The bendy youngster has been teaching adults at an ashram, in northern India, for the last two years.
Her trainer, Hari Chetan, 67, set up the ashram 35 years ago and as soon as little Shruti became one of his students, as a tiny four-year old, he spotted her talents. 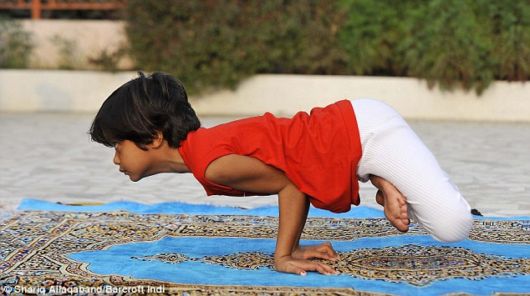 Her trainer, Hari Chetan, began teaching her when she was four, and calls her a miracle and a perfectionist

Now she starts her classes at 5.30am every morning, at Brahmanand Saraswati Dham, in the Jhunsi town, dressed in white leggings and a red t-shirt surrounded by 30 eager pupils ranging from businessmen, teachers, housewives to pensioners.
Shruti said: ‘It feels good when people follow my instructions, I feel like a real teacher.

‘I got interested in yoga after seeing my brother do it. I tried picking it up myself but it was too hard. So I asked my parents to send me to yoga classes.’ 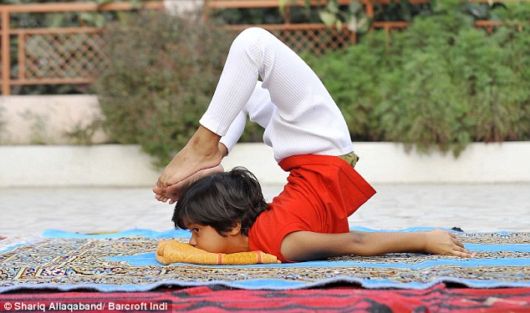 Shruti has mastered some of yoga’s most challenging positions. She can easily hold her entire body on the strength of her little arms and hang her legs backwards over her head

Her brother, Harsh Kumar, now 11-years-old, made the Limca Book of Records at the tender age of five by learning all 84 yoga positions – but he’s never been interested in being a teacher like his sister.
Hari, who Shruti also calls her grandfather, think she’s a miracle.

‘She’s a fast learner and a perfectionist. She grasps techniques quickly unlike kids her own age, who get bored with something as patience consuming as yoga.
‘Within just six months of her training, she surprised everyone by doing the toughest positions with ease and perfection. She’s a natural.’ 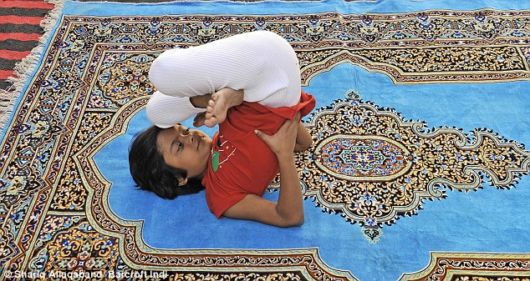 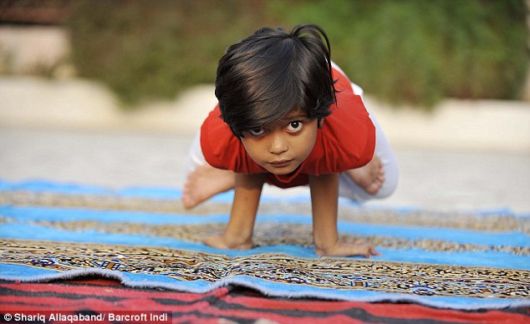 Flexible: Shruti first got interested in yoga after seeing her brother do it

Shruti can manage some of yoga’s most challenging positions. She can easily hold her entire body on the strength of her little arms and hang her legs right over her head backwards.
One of Shruti’s fans, 90-year-old Swami Bhanu, a retired teacher, said: ‘The best thing about Shruti is she tries to provide an alternative position for the complicated ones that are difficult for an older person like me to do. She’s very patient.’

Businessman Lokendra Pal Singh, 48, has been attending Shruti’s classes for three months and said, ‘I have noticed a positive change in my life. I used to be short-tempered, but now I’m able to control my anger to quite an extent and it’s all thanks to a little six-year old.’ 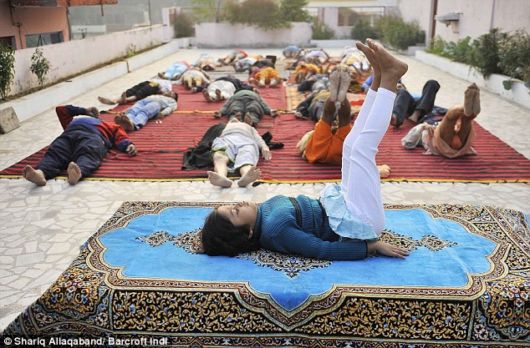 Shruti teaches yoga to classes of up to 30 adults, starting at 5:30am, at the Swami Brahmachand Saraswati Kaivalya Dham Ashram in Allahabad, Uttar Pradesh in India.