A short documentary “Wuhan School Night” records the real situation of people in Wuhan City, made by a film crew stuck in the heart of the epidemic city COVID-19, has attracted millions. Weibo views on social networks.

In just 4 minutes, ” Wuhan School Night ” (English name is Wuhan: The long night) conveyed to viewers full of the sad reality of the city that was a bustling transportation center with 14 million people in the context of the COVID-19 epidemic.

The streets are quiet, the tall buildings stand still and the atmosphere is gray, cold and the landscape is empty of people is what “Wuhan School Night” reveals the mind of translation in Wuhan City.

According to sixthtone.com on February 18, the footage could remind viewers of a post-apocalyptic view despite the fact that it’s the current landscape in this city.

The team behind this short documentary was a film crew that went to Wuhan to film the scene but was stuck in the city from January 23 to now due to the Beijing government’s blockade of Wuhan to prevent the spread. spread of COVID-19 epidemic.

“The team members are stuck in Wuhan. They want to do something meaningful. They want to record what happened” – director Lan Bo shared.

Director Lan Bo told Sixth Tone that his film crew has postponed the project that is unfinished due to the epidemic. After that, the crew moved to film the documentary “Wuhan School Night” and share it online.

Every day in the morning and in the evening, cinematographer Xie Dan rides his bicycle and uses his phone to record the corners, the quiet streets, and sometimes a few lonely people appear in the gloomy vast landscape. in Wuhan.

After 8 days of shooting and editing, the crew completed a 4-minute short documentary and named it “Wuhan School Night”. The film has attracted more than 300 million views on the social network Weibo and shows no signs of stopping.

Picture of a resident standing by his window at Yangtze Street, Wuhan and singing his voice in the film Wuhan School Night – Photo: Weibo

From the positive reception of netizens, director Lan Bo decided to make a long documentary on this hot issue. “The first is that since the blockade of Wuhan, there has been no such record of the setting. Next, I feel that these videos will be very valuable as historical documents as well as documentary. for other documentaries “- director Lan Bo shared.

Lan Bo said the filming team will focus on daily life stories in Wuhan such as the work of health workers, the activities of the people in the context of the disease and the effects of the epidemic on them. 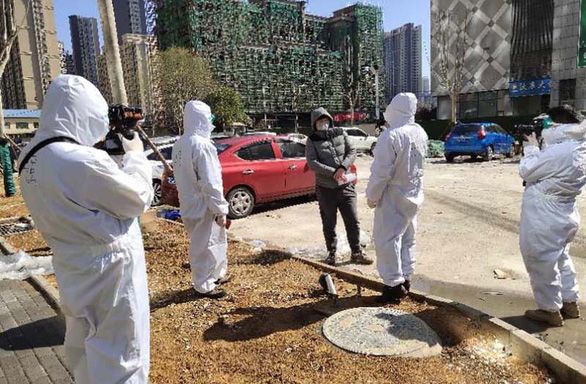 “I hope people can tell the truth, hope they can sincerely face the camera. I hope my movies will not be tinted with lies” – Mr. Lan Bo shared.

To date, the COVID epidemic has killed 2,005 people with more than 70,000 infections worldwide.