Inside the glacier-cave: Amazing underground chamber with giant ice slides that never melt

These are the stunning images which capture the breathtaking beauty of a new world discovered in an ice chasm beneath the Rocky Mountains.

The cave, called Booming Ice Chasm, was named for it’s incredible acoustics – as falling rocks crash and ‘boom’ when they tumble down the 140 metre deep cave.

The crystal clear ice is several meters thick – and explorers say navigating across it makes them feel like they are flying. 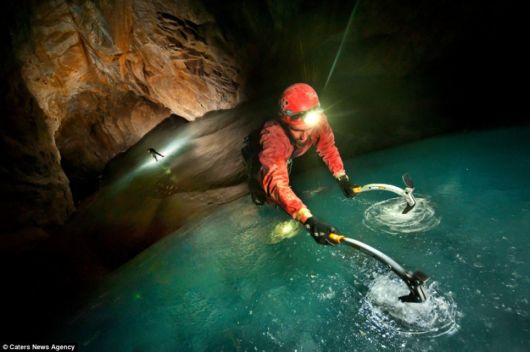 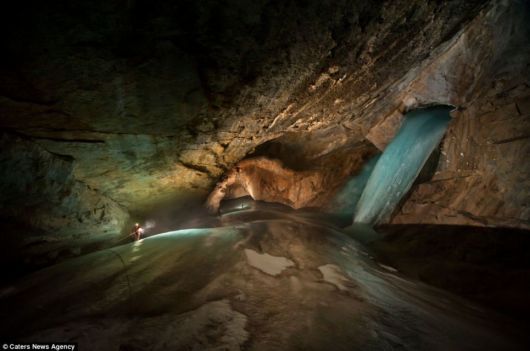 The cave has unique acoustics as falling rocks crash and boom when they tumble down the 140 metre deep cave, making it hard to converse

The cave is known as a ‘cold-trap cave’ where cool winter air settles into the depth and is never able to escape.

As melting snow and rainwater trickle down the cave entrance it is transformed into an amazing natural frozen water slide.

In winter, cold dense air settles into the cave, displacing any warmer air which rises and exits the cave.

In summer, the cold cave air remains in place as the relatively warm surface air is lighter and cannot enter, keeping the cave frozen all year round.

However, although the water makes people feel like they’re flying, one slip can send climbers hurtling down the frozen water slide slamming into the wall below.

Echo makes communication in the 704 metre chasm hard so intrepid explorers Adam Walker, Nick Vieira and Christian Stenner had to wait several seconds after each syllable to make it understandable.

The cave is known as a ‘cold-trap cave’ where cool winter air settles into the depth and is never able to escape.

As melting snow and rainwater trickle down the cave entrance it’s transformed into an amazing natural frozen water slide.

The spectacular snaps were captured by Belgian photographer Francois-Xavier De Ruydts, 30, on an exploration to the Crow’s Nest Pass area of Alberta, Canada, in July.

Francois, who lives in Vancouver, Canada, said: ‘It’s particularly hard to get around when inside the cage – traction devices called crampons are mandatory.

‘It can be fatal if you slip as you slide all the way to the bottom crashing into the wall at a frightening speed.

‘The danger in the cave is that once you are down there, if you have a problem, the only way back is to go all the way through where you came from.

‘Few injuries in caves are fatal but it can take days to bring an injured person back to the surface and many die of exhaustion and hypothermia in the process. 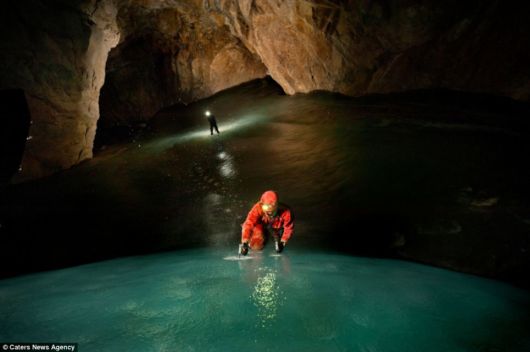 Water dripping into the cave’s entrance causes a huge ice slide to form, which explorers say is treacherous as the ice is crystal clear and difficult to navigate 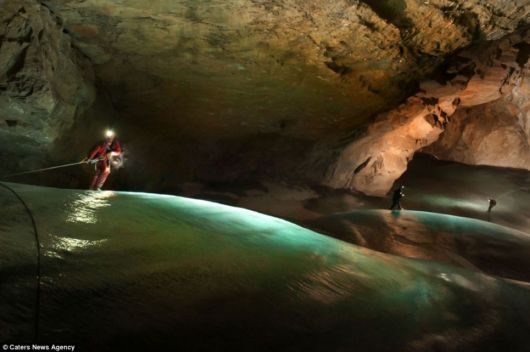 As melting snow and rainwater trickle down the cave entrance, it is transformed into an amazing natural frozen water slide 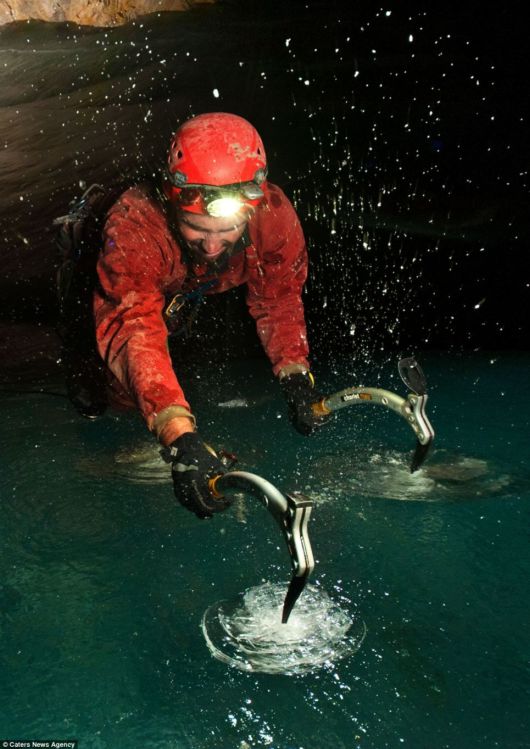 ‘The additional danger in this cave is the ice – it makes it much harder to get around and much colder.

‘Controlling body temperature is such an environment is tough.

‘Sweating is dangerous because when you stop exercising your sweat will cool down and you can get very, very cold.

‘Several passages which feed off this cave have yet to be explored.

‘The incredible ice fall that flows from the thin passage has never been climbed and no one knows what lays beyond it.

‘I have never seen anything like this before. It is a truly unique sight and there are very few caves like this, particularly as big as this one.’ 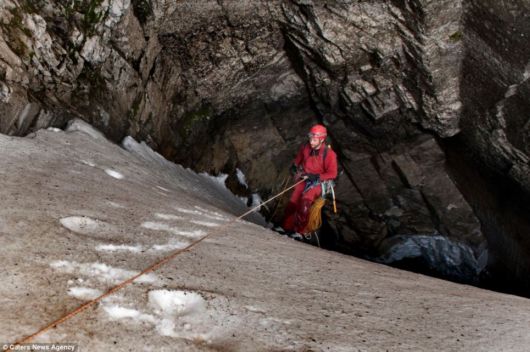 Adam Walker at the entrance to the cave, preparing to descend onto the ‘ice slide’ 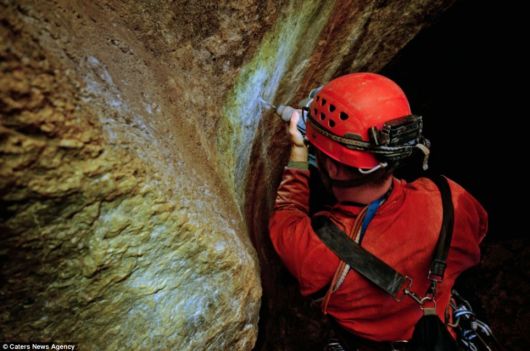